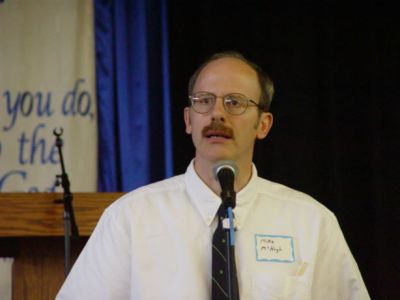 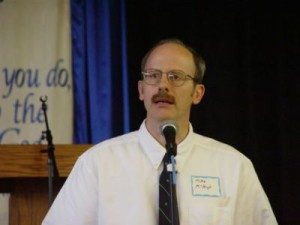 Michael McHugh is a man that I have wanted to interview on my blog for quite some time. Mike is a humble and unassuming guy who has worked for many years behind the scenes with little-to-no fanfare or applause. He has served as an Editor for Christian Liberty Press and has edited literally thousands of pages of quality literature and curriculum for Christian students.

Very few endeavors are as important as Christian education for children, and Mike has been on the front lines of that battle for over three decades. He is dedicated to promoting the Kingdom of Christ and expanding a Biblical worldview into all areas of life. As a young teenager I was influenced by a number of articles that he wrote for the Home School Digest magazine in the late 1980s and early 90s. His writings helped to shape my understanding of the Biblical basis for Parental Rights, the need for understanding proper governmental spheres (i.e. The Individual, The Family, The Church and The Civil Magistrate), and recognizing the importance of viewing each subject area from a definitively Biblical perspective.

For several years as a homeschooled student I was enrolled with CLASS, a distance learning program offered by Christian Liberty Academy, so his work through them influenced me indirectly as well.

Israel Wayne: How did you get involved with the Christian education movement?

Michael McHugh: In early 1978, I began to ask the Lord to set me upon a new career path. A few weeks later, the pastor who ran a small local church school in the suburbs of Chicago called Christian Liberty Academy offered me a position on staff with their new “home study program“. I came on staff in the spring of 1978, just as the home school movement in the US was beginning to grow rapidly.

Israel Wayne: Who were some of your most influential mentors regarding Christian education (even through books)?

Michael McHugh: The man God used in my life to give my work direction and biblical focus was Dr. Paul Lindstrom. I was saved by the grace of God as I sat under the preaching of Pastor Lindstrom in 1976, and I had the privilege to work closely with him for many years.  Other key mentors included the writings ofRousas Rushdoony, Cornelius Van Til, Greg Bahnsen,  Francis Schaeffer, and Abraham Kuyper.

Israel Wayne: What does it mean to teach a “Biblical worldview” to students?

Michael McHugh: Teaching a “biblical worldview” means helping students to recognize the crown rights of King Jesus in every area of life, so that they might be able to bring every thought captive to the Lord Jesus Christ. As many faithful Christians have observed over the centuries; Christ is either Lord of all, or He is not Lord at all. To succeed in the task of training students to embrace a biblical world and life view, means that they come to the place of understanding that their whole existence is centered upon the task of glorifying God and enjoying Him forever.

Israel Wayne: What do you see as being some of the most successful elements of the home education movement?

Michael McHugh: I am encouraged that many Christian home educators have resisted the temptation to adopt secular curriculum standards and textbooks. I am also encouraged by the level of respect and cooperation that home school parents have generally received from their local communities.

Israel Wayne: What are some trends in the Christian world that encourage you right now?

Michael McHugh: I am encouraged that a growing number of professing Christians are expressing a great interest in the subject of creation science based upon a literal six day, young earth model. Also, many believers are beginning to move away from secular approaches to family relationships, counseling, and psychology. Finally, God’s people seem to be more open to praying for and supporting persecuted Christians around the world.

Israel Wayne: If you could give a word of challenge (or even warning) to homeschoolers and Christian school teachers, what would it be?

Michael McHugh: My challenge to them, would be that they not grow weary in well doing, and that they remain steadfast and unmovable in their mission to train God’s little lambs.

Israel Wayne: What do you hope will be your legacy 100 years from now?

Michael McHugh: My only desire 100 years from now, is that when my grandchildren learn something about my life, it will be an encouragement for them to think more about Jesus Christ.