In Michigan, the most pivotal court case in opening up homeschooling to parents was De Jonge vs. Michigan. Mark and Christine De Jonge were called into court and accused of violating the state’s compulsory attendance laws. You can read more about their case here:

Israel Wayne: In what year did your family begin home educating, and what originally motivated you to choose that option? 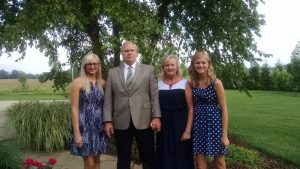 Mark & Christine De Jonge: We enrolled our first child Tony in the public school for kindergarten and 1st grade.  We did not like what we saw in the class room (Chris being a room mother). Tony came home with papers on evolution with pictures along and literature of conjecture on how they believed species evolved.  And then there were the manners of the children, the disrespect for the teacher, and the fact our son didn’t seem to be learning much. In kindergarten he didn’t even finish going through the Alphabet.  The whole picture looked chaotic. Tony came home from school a different boy, being separated from the rest of the family. Not what we had envisioned for your Christian family.

Chris, a graduate of a Christian school and going back to a 10 year class reunion saw a big difference in the now mothers of children.  The women talked of careers, what they did in the church in regards to voting and holding office.  We started to feel and know this was not how our children were going to be trained. We wanted to make a difference.

We saw an article in the GR Press about a family in Dorr, MI who were homeschooling. We went to hear them speak at a church. We saw the curriculum from Christian Liberty Academy there that night and were very excited to begin. From that time on, as a couple, we grew in the Lord and knew what God was leading us to homeschool.

Israel Wayne: Your court case was precedent setting in terms of removing the teacher certification requirement for homeschoolers in Michigan. Describe what went through your minds when you found out that you had been charged with truancy in 1985 because you were homeschooling.

Mark & Christine De Jonge: When we started homeschooling we were very secretive. We did not tell anyone but our parents and some in our small church. When the school bus would go by we would be sure our children were out of sight.  I’m not even sure where we had heard of HSLDA but we had applied for membership and Chris was confronted at the front door only two weeks into the start of the school year, two or three days after we had received notification that we had been accepted as members in HSLDA.  That was a time of anxiety.  The social workers were trying to be intimidating as possible and threatened to take away our children because we were not sending our children to school. Probably the most difficult part of all this was that it was someone quite close to us that reported us. So few people knew we were homeschooling, the confrontation from the social workers was so soon after we started schooling and they had the names and birthdates of the children all correct.

By the time the truancy charges actually came it seemed as just a matter of course as we had been in regular contact with HSLDA and they helped prepare us for what was coming.

Israel Wayne: Did you object to teacher certification on religious grounds? If so, what was your thought process on that issue?

Mark & Christine De Jonge: Yes we did. We were challenged on this by HSLDA.  We had been trained in the Word concerning the authority God has given to different institutions on earth, Civil, Church and the Family. Each having their own realm of authority. We thoroughly searched the Word of God and were convinced that nowhere is education given to the State but rather the State had usurped that authority.   We could not agree to teacher certification because that would be denying God’s authority that he has given to us as parents and allow the state control in our home in an area that God has not given them.

Israel Wayne: Who were the significant attorneys who helped you to represent your case?

Mark & Christine De Jonge: That is one of the parts that for us that was a great joy.  David Kallman handled the case early on at the local district court with consultation with HSLDA.  Chris Klicka with HLSDA through the Appeals Courts and Michael Farris, Pres of HLSDA, along with Chris Klicka at the Supreme Court of MI. God has enriched our lives having had the privileged in getting to know them.

Israel Wayne: Did you have any idea at the time that your case would be so important for the future of homeschooling in Michigan?

Mark & Christine De Jonge: Starting out we certainly did not.  We just wanted to train our children and be left alone. But, from the time the social workers showed up at our door, to when the State Supreme Court decision come down in our favor, it had been 9 years.  So at some point along the way it became obvious to us it was going to be very important.  Truthfully it is not why we fought but we were thrilled that God used men like our attorneys and an organization like HSLDA to establish His rightful authority in the home for those who seek to fulfill His will.

Mark & Christine DeJonge: Those were some crazy times and a few crazies had made contact with us wanting to offer their counsel. It seems a little surreal now but we did meet with others in the homeschool community and made plans before we went to the circuit court judge on an appeal to get a stay of sentence.  This judge could have denied our appeal and ordered the children into a public school and if we refused he could have held us in contempt of court or even taken our children into custody.  We had our children stay at one of those parents homes and if things had gone badly they were to take them out of state to another homeschool family.  By the time it got to the State Supreme Court we did not have those kinds of fears.  If it had gone against us at the State Supreme Court we probably would have just moved out of state. On the other hand if we would have appealed that decision, our two oldest that were named in the suit would no longer have been of compulsorily age by the time we ran out of the appeals process.

Israel Wayne: What advice would you give to new families who are just beginning their homeschooling journey?

Mark & Christine De Jonge: Don’t set up your HS like the State Schools. All of our everyday life is schooling. Have your sit-down school books, but incorporate everything you do with your children. Other than teaching that all of this world, and one’s life, are to be under the Kingship of Christ, nothing is more important than reading.  If your child can read and comprehend they have access to every opportunity. Teach manners and respect for adults. You know what’s best for your children. Everything you need is available to you and your children. Do your research and join your church homeschooling or area group. As a note of caution, do not become so busy with every support group and activity that is available out there that you are not spending the time that you should be one on one at home with your child. You can become so busy that you miss out on the true joy of training your children.

Israel Wayne: Please give us an update on your children (and grandchildren?) and what life has been like for you in the post-homeschooling years.

Mark & Christine De Jonge: We have seven married children, one more daughter getting married on Oct 2nd and we have 26 grandchildren.  That leaves us with two daughters at home. It is wonderful to witness God’s covenant faithfulness to us as we have sought to be faithful to our promise to Him to train our children up in the “fear and admonition of the Lord”.

Our youngest daughter has graduated only a year and four month ago so we do not know so much about the post-homeschool years but I don’t think it really it is so much different.  It is just life. We do have some different activities but the same walking before our Lord.  It is wonderful to be a witness of all our children being faithful in training their children in the way of our God.

Israel Wayne: Finally, please share anything else that you think might be helpful for homeschoolers today to know about your court case and/or homeschooling experience.

Mark & Christine De Jonge: All of those to whom God has given children can and must train their children.  We know that because it is God who has given us children and He has commanded that we train our children.  It does not mean that you cannot receive assistance but the responsibility and authority is yours.

Be in the Lord!  Let your children see and hear you pray.  Pray for them, pray with them. Read the Word. Be faithful in your attendance in church. Keep the Sabbath Day Holy.

We are all a bit dysfunctional, very imperfect, and all sinners. Be forgiving toward one another.

Teach them to love our Country and why our country is so great, or at least its heritage.  Why it’s ideals are better than many other countries.

Stand up for what you know is truth. God’s Word is for our training and our children, for today and till Christ returns.