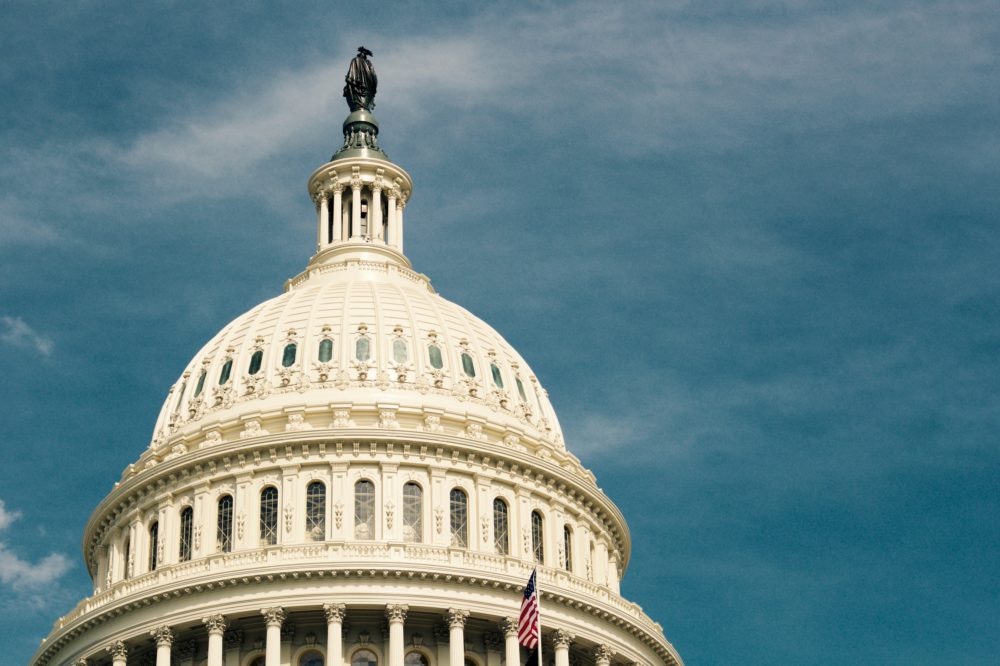 Preface: This was the first article I ever wrote for national publication. It was first published in Home School Digest magazine in 1994. I found this recently and wanted to share it here, as a part of homeschooling history.

HR-6 was a seemingly ominous bill that threatened the ability of thousands of homeschooling families to continue to teach their own children at home legally. This was before the advent of cell phones, social media, and even the internet was still untapped territory for many. Information on this bill was spread through a grassroots “fax tree” system, as groups like HSLDA, and various state homeschooling associations, passed on information to local and regional support group members, who then passed it on to their members.

The U.S. Capitol Building received so many phone calls, it shut down the Capitol switchboard! It has been speculated by Capitol insiders that there have never been so many responses recorded on one bill in the history of the U.S. Congress! This response made almost bigger news than the bill itself. It really put the modern-day homeschooling movement on the map as a permanent fixture in our society. It wasn’t just an option being chosen by “fringe elements,” but it had truly begun to become mainstream.

My article below isn’t very good (it was my first published effort), so please bear with the mistakes and lack of experience. It just seems like it needs to be remembered. Maybe this will encourage us to remember that “The price of liberty is eternal vigilance.” (Thomas Jefferson)

“I can’t believe that Congress would try to run through a bill that would eliminate homeschooling!”, said the startled and somewhat fearful homeschool mother on the other end of the phone line. “Why would the Government want to do away with our right to educate our children at home?” “Are homeschoolers really safe now?”

Questions still remain as to the intent and finality of the ominous bill, that many of our Representatives assured us had nothing to do with homeschools or private schools. Concern first began with an amendment attached to HR-6 proposed by Rep. George Miller (D-CA) known as the “Improving America’s Schools Act of 1994”. Despite the inviting title, this bill provides government funding of God-less school-based health clinics, Outcome Based Education, and a number of activities which many parents would consider detrimental to their children’s education. This “Education Reform” bill discourages teaching of the basics of education, and strongly discourages parental involvement in the school programs.

HR-6 (The Elementary and Secondary Education Act of 1965 or ESEA) is an over 700 page bill that spends $7 billion tax dollars a year, to fund 90% of public schools as well as some private schools. ESEA must be reauthorized every 5 years, and well, we’ve just celebrated it’s 29th birthday. The real question is: “Why did this new revision of an old bill cause what could be the largest stirring of homeschool families and organizations in the history of education?”

What was the threat to homeschool families? Section 2124(e) of the Miller amendment requires that “Each State applying for funds under this title shall provide the secretary assurance that after July 1, 1998 it will require each local educational agency within the state to certify that each full time teacher in schools under the jurisdiction of the agency is certified to teach the subject area to which he or she is assigned.”

This wasn’t intended to apply to homeschoolers, right? Well, we could assume it didn’t, until an amendment by Rep. Dick Armey (R-TX) that clearly excluded home and private schools from HR-6 was strongly rejected by a vote in committee. Not only would homeschoolers need to be federally certified (Teachers at the high school level would need to be certified in every subject that they teach.), but it is probable that they would only be permitted to teach approved curriculum, and follow all the guidelines that the public schools are required to conform to. Would only homeschoolers receiving federal funding apply?

Read Section 2124(e) again. It says, “each state,” not each school. I would like to give the democratic party the benefit of the doubt and say that they really didn’t want homeschools and private schools to be covered in the bill. They said they didn’t, but why would they leave such all-encompassing gaps in their bill and include us in the committee vote. I’m not sure, but my guess is that perhaps they were intending to involve us until they realized the number of voters who opposed this amendment. Re-election is still desired by Government officials.

How impressive was the stand? Several capital switchboard operators likened it to responses seen only on major bills like NAFTA, the new budget plan and other globally significant bills. The fact that a small (but growing) group of private and homeschoolers made that kind of an impact was a definite eye-opener for legislators.

The response to HR-6 by homeschoolers was a blessing to my soul. I saw people overlook differences of opinion and methods of education to stand united for a common purpose. There were many feelings that arose in our hearts. Some felt fear and despair (which are truly weapons of our spiritual enemy — see Psalm 118:6 and 2 Tim.1:7). Others felt outrage and anger (which can be destructive as well, as shown in Job 5:2 and Prov.15:18).

To be controlled by anger can cause us to sin, yet sometimes a righteous anger can stir us to action, Eph. 4:26. Thousands of homeschoolers from every background and religion came to immediate action and did what they could to insure that our freedom to educate at home remains intact. Many called and faxed letters to their Congressman, while others fought the battle through prayer and fasting. God used all of this to bring about a victory. It must be noted that this was not a success won by any one organization, support group, church, lobbyist, Congressman or political leader, but was it was brought about only by a united effort. This was a win for all who believe in freedom.

Was the response by homeschoolers within the bounds of acceptable Biblical behavior? I believe that it was, for the majority of those who reacted. Although some people were spurred to action through a Holy anger, the methods used in dealing with their Representatives were, in most cases, not hostile or hate-filled retorts, but rather a simple appeal to the Governing Authorities to address what could later be construed as inclusive for home educators. This appears to be permitted by Biblical standards.

Even the Apostle Paul appealed to Caesar when he was falsely accused. Acts 25:10-11. There is a fine line between coming against an authority which is established by God (1 Pet. 2:13), and obeying God rather than man as Peter himself said in Acts 4:19. Christians need to proceed very cautiously when it comes to these issues of governmental control.

Now just in case there are those who are tempted to kick back and relax now that the threat of HR-6 is past, please consider the swiftness of the bill and realize that Government control over home schooling will always be a part of the liberal political agenda. (Please keep in mind that liberal Congressmen are not our enemies. Oppression is our enemy.)

If History is an indication, the State and Federal Government will not rest until they have a monopoly on education. This issue will come up again. A different time, a new name, but it will resurrect. It may not come through a forward, forceful attack on our rights. However; it may be through a more subtle approach, like school vouchers where we give our rights away by accepting government funding.

If you must rest, rest assured that we will face this giant again. The key to our victories in the future will be determined by how well we paid attention in our previous lessons. Have we learned that a house divided against itself can’t stand? Homeschooling needs to represent all those who choose to home educate, not just those who fit in our approved, ¨organized support groups. There were many non-Christian homeschoolers who stood for the rights of Christian homeschoolers. Do we understand that we cannot reject the open hand a neighbor or fellow homeschooler, willing to help us, simply because we disagree with them theologically or philosophically? We must stand with all Christian, non-Christian, or undecided homeschoolers in their right to educate their children as they feel is best. By fragmenting and rejecting certain homeschoolers from our circle of fellowship, because of different beliefs, we weaken our ability to stand together against enemies of Freedom. We don’t need to agree on everything, as groups of home educators, but we do need to walk with each other as much as we can.

It is important for us to know what we believe and to stand for our convictions, but as Christians we have a tremendous opportunity to share our faith with families who don’t believe the same as we do because we share a common ground of homeschooling. I have known New Age homeschoolers that I couldn’t build a church with, and we disagree on almost every issue imaginable, but I support their right to teach their children at home. I don’t conform to their beliefs, and they may want to have limited contact with me because of mine, but they support our right to home educate.

If there is anything we should have learned from HR-6, it is the fact that we need to be connected and we need to be unified. What can we do to ensure that this type of legislation doesn’t so easily catch us off guard?

Although there are no absolute safeguards, we can be informed about what is going on in Federal and State Government, and subscribe to publications that inform us about Government and Education. We need to present ourselves, as homeschoolers, to our communities as examples rather than an object of scorn. By writing a kind letter, or by making a polite phone call to our Senators and Congressmen, we can let them know that we home educate, and that we have many friends who also teach at home.

Ask them to be on the watch for any bill that may restrict homeschool freedom and let them know we appreciate them standing with us. Many conservative and Christian Congressmen made strong stands on our behalf. Let them know we appreciate it. By interacting with our political leaders in a positive way, we can let them know that we are responding out of love for our children and not because we are a weird group of uninformed reactionaries. Let us pray for God to continue to “deliver us from evil”, and let’s keep our hearts open to other homeschoolers who need our help. As for now, we need to thank the Lord for freedom to educate our children as we see fit and keep praying for those who are struggling in this process we call homeschooling.

Photo by Jomar on Unsplash